In the “Adjust tooth set-up” (Tooth placement) step the tooth positions can be adapted to the individual patient situation. To guarantee functional posterior relationship, the posterior teeth of the opposing quadrant are fixed together and can only be moved in one block. This means that when the position of the first posterior tooth quadrant is changed the antagonist fourth posterior tooth quadrant is automatically moved and vice versa. The same applies for the second and third quadrants. 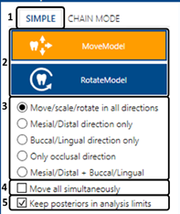 Under the tab “Simple” [1] there are several possibilities of Controlling the position of the teeth. Initially, the freedom of movement of the posterior teeth is limited to the adjustment area of the model analysis. In contrast, the anterior teeth are not subjected to any analysis-related limitation. The posterior teeth can also be moved outside the adjustment area by activating the checkbox [5]. The teeth can be moved freely and rotated [2] or only allowed individual directions of movement. The different directions of movement can be selected in field [3]. If the checkbox [4] is activated, all teeth can be moved simultaneously. 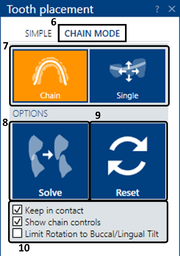 While the “Chain Mode” is activated, there is a control point in front of each anterior tooth. If this is green, the tooth is part of the linking. By clicking on the control point of a tooth it turns to red and the linking is disengaged. Red highlighted teeth are no longer affected by movement of the chain. With this function it is possible to fix individual teeth in their position, while the other teeth can continue to be aligned. As soon as a tooth in the chain is touched in the Chain mode and moved for the first time using the mouse, all intersections and distances between the green highlighted teeth in the chain are automatically removed. 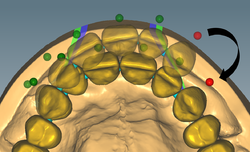 The buttons “Chain” and “Single” are found under [7]. If “Chain” is activated, the teeth can be moved connected on the chain. If the “Single” mode is applied, individual teeth can be moved without affecting the entire chain. Under “Keep in contact”[10] it can be decided whether the proximal contacts should be retained or not during movement in the 2 different modes. 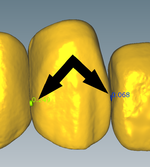 Slight intersections between the upper and lower anterior teeth can be removed using the function “Solve antagonist intersections” [8]. If the teeth have excessively large intersections, this feature cannot be used, as in this case the set-up would be changed too greatly. During positioning of the teeth the proximal and antagonist contacts are marked with points. The points also have information given in mm and coloured indicators. These indicate the depth of the intersections. With the buttons at [9] all changes made can be cancelled and returned to the initially loaded set-up. The button “Reset (keep red)” only resets the green highlighted teeth. The following approach has proven successful for setting the anterior teeth in the required position in the easiest possible way. 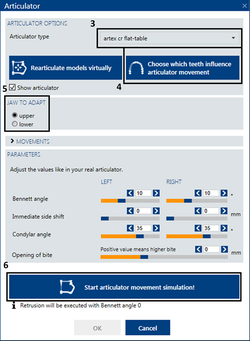 The incisal guidance table required is selected in the dropdown menu “Articulator Type” [3]. To enable the posterior tooth set-up when performing articulator movements it is recommended to use the “artex cr flat-table”. For producing a functional anterior tooth set-up a window is opened in which the upper anterior teeth are deselected using a click of the mouse, with the function “Select which teeth influence the movement” [4]. The upper jaw is now select at “Adapting of” [5] and the movement simulation started at the click of the button “Execute rticulator movement simulation” [6].

A colour scale can be opened using the “Show intersections” icon [2].

A click on the arrow [7] will take the operator to the settings for this window.

By placing a tick at the respective movements the corresponding visualisation of the intersections are activated taking into account the previously set parameters.