In the following Wizard step “Design prosthetic base” under the tab “Change/Draw” [1] the outline of the denture base to be generated can be defined by placing points on the margin of the mucobuccal fold. Once all the points have been placed, they are either confirmed by a double click of the left mouse key or with button “Accept marked line“ [2]. The denture base is then generated with a click on the button “Apply” [4]. 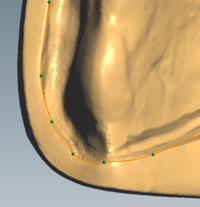 There are various possibilities of influencing the initially loaded base under the tab “Properties” [1].

The periphery of the base can be automatically detected by the software with the aid of the Detect function.

Four points are placed as wide apart as possible at mucobuccal fold positions. Once the four points have been placed, generation of the periphery line starts automatically.

Manual adjustment of the periphery cannot be ruled out due to the individual morphology of an edentulous upper or lower jaw. This requires switching again to “Change/Draw” and adjusting.

The cervical gingival margin of the wax base at the denture teeth can be custom adapted in this tab.

The green points can be dragged to any position by pressing the left mouse key. The denture base the base is generated up to the defined gingival margin (green line) during creation of the denture base.